Last weekend was MAGIC’s Project eReboot event; it’s somewhat difficult to describe such a unique event. eReboot was a fast-paced, energized computer-building challenge with cryptic puzzles and secret messages to solve. Beyond being a fun and challenging competition, it was a great learning experience and required creative, critical thinking to succeed: exactly the kind of thinking that is essential for thriving and building a career in today’s modern, dynamic world of technology. 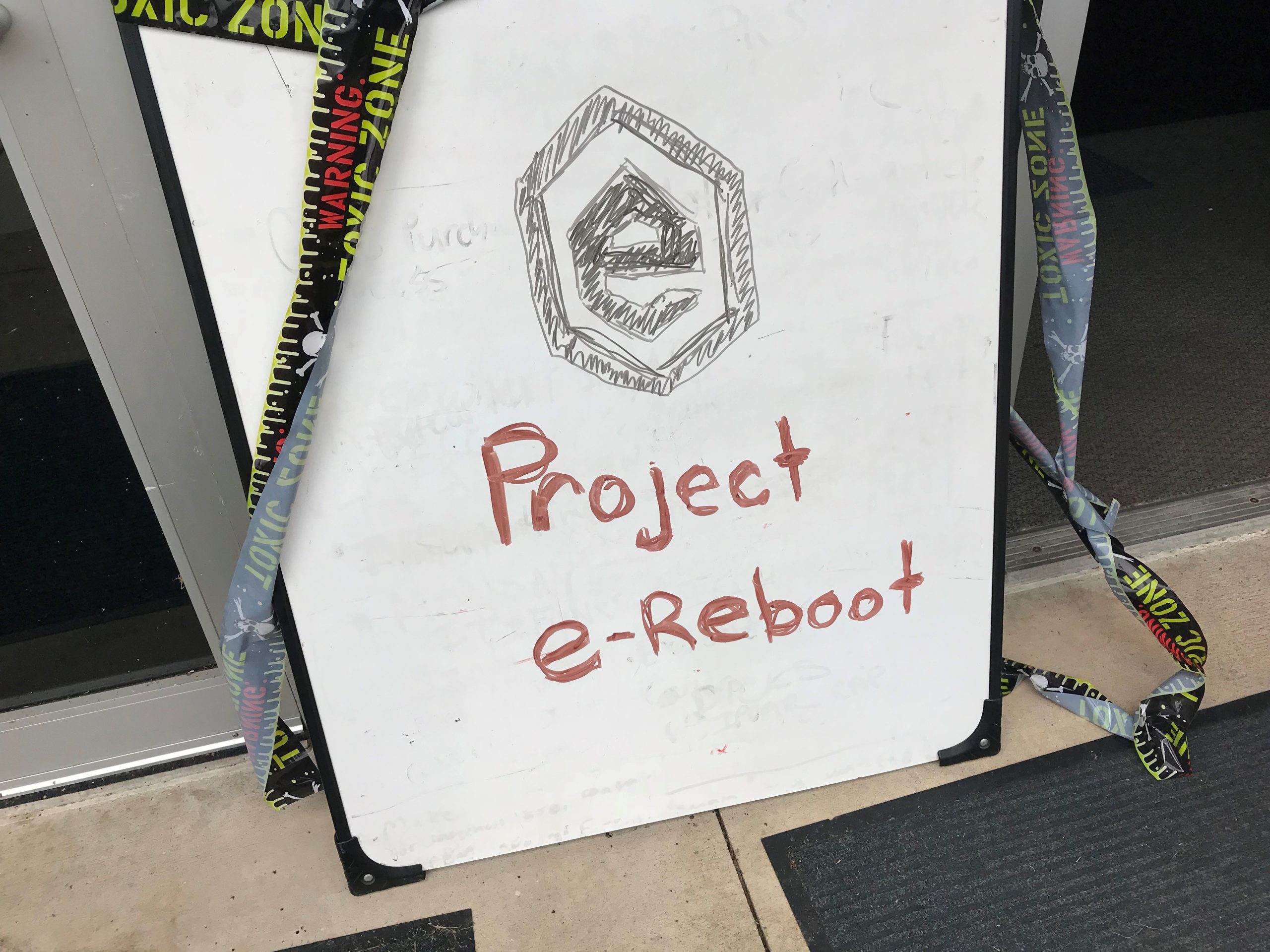 The entire event took place at e-End, an electronics recycling and data destruction company in Frederick, Maryland. e-End helps protect personal data, financial data, and digital information from personal computer users, businesses, hospitals, and other organizations with extremely sensitive data by securely wiping hard drives and responsibly disposing of them or recycling them.

The competition was a multi-step challenge with many puzzles and riddles. Project eReboot had a “zombie apocalypse” theme, in which competitors had to help save humanity by building a computer from old parts, connecting to the internet, and contacting other survivors before the next wave of attacks from the undead arrived. e-End’s large, concrete-and-metal warehouse filled with thousands of computers, monitors, circuit boards, cases, and other components stacked on towering shelves was the perfect setting. 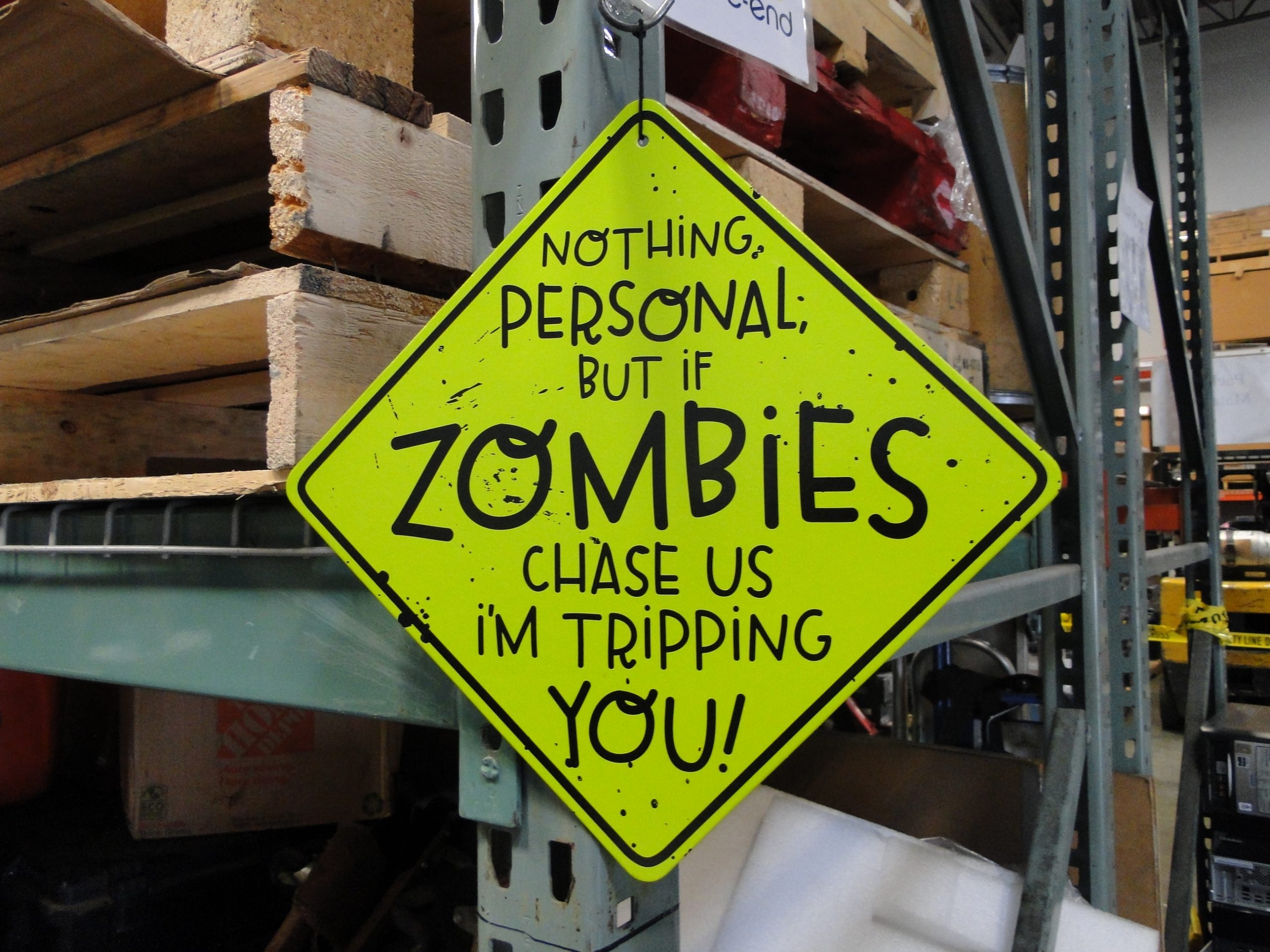 As the competition began, every group ran to find the table with their paper name card on it. Each team was given a large cardboard box filled with dozens of computer components, among other things that would be less helpful in building a computer, such as snakes, bugs, and spiders (for legal reasons, I must clarify that these were not real). We were also given two pieces of paper, each with an encoded message that we had to solve to win the challenge. One paper would reveal the Wi-Fi password, while the other contained a secret message that we had to print out to complete the challenge. The first team to successfully build their computer, solve all the puzzles, and print out the secret message won the competition. Each team set to work, trying to figure out how to make each of the silvery components combine to form a working computer. Some progressed quite quickly, while others (like my group) took somewhat longer.

We started by putting out the case, a large metal frame in which all the computer’s parts are placed. The case helps protect the innards of the computer and keeps everything together. We added a motherboard, the main circuit board that other components are connected to. The CPU, or Central Processing Unit – the highly complex chip that drives most of the computer’s internal operations – was already placed inside the motherboard socket (which is probably a good thing – accidentally bending or breaking any of the dozens of small golden “pins” that connect the CPU to the motherboard can be a very expensive mistake to make). It took some time to figure out how to put in each component and where it should go. Thankfully, it did not matter too much where each one was, as long as they were all connected correctly. 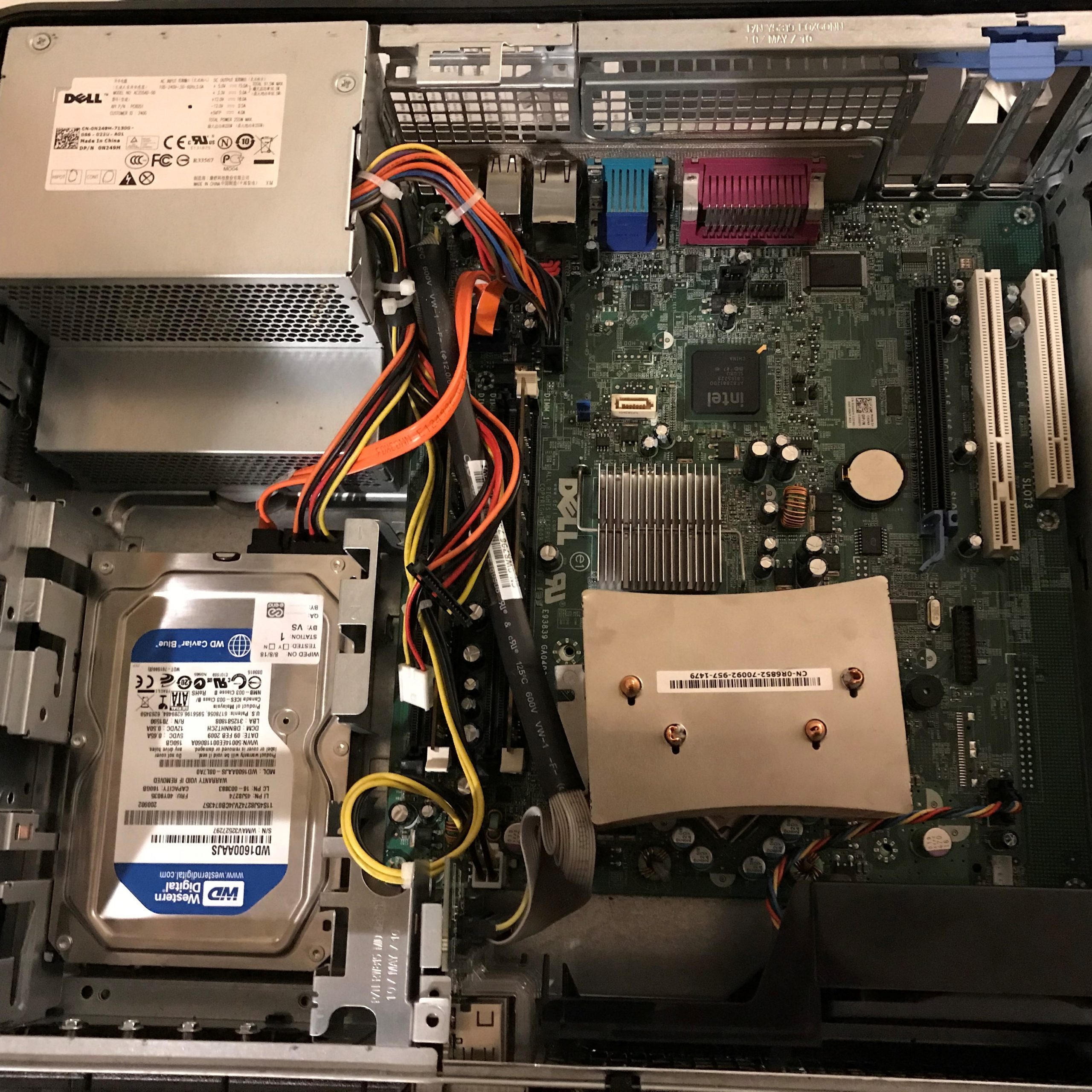 Next, we added a video card (also known as a graphics card, or graphics processing unit [GPU]). It took a couple minutes to figure out how to connect it to the motherboard, but we were eventually successful. We added a heat sink on top of the CPU – this essential metal waffle helps to protect the CPU from overheating by drawing heat away into thermally conductive blades. We placed a fan near the front of the computer to help cool the motherboard, and a power supply to provide electricity to everything. A 160 gigabyte WD hard drive was added to store the computer’s data. Finally, we added the USB ports and power button, plugged everything into the motherboard, and plugged in the Wi-Fi network adapter and USB drive pre-loaded with the Ubuntu operating system into the ports. We pressed the “power on” button, and . . . nothing happened.

It was time to debug. As is almost always the case with anything related to computers, our creation had not worked the first time – or the second, or the third. Eventually, someone mentioned to us that the heat sink needed some thermal paste to connect it to the CPU. We squeezed a copious amount of the metallic cement from a small tube onto the CPU, and tried turning on the computer again. This time, it turned on, but as soon as we booted it up, we got an error message. We soon found out that the computer would default to the video card if one was installed – and our monitor was connected directly to the motherboard’s video connector. We removed the video card; that didn’t work. My team was told that we may have installed the wrong type of RAM. After squinting at the small markings on each card for about 20 minutes, we finally had the right RAM cards installed and booted up the computer. The computer started fine and didn’t give us any errors, but was not displaying anything on the screen other than a simple boot message in large black and white pixels. We realized that the PC may have been unable to find the USB drive to boot from; after fiddling with some boot menus and settings, we started it up again and were met with a plain Ubuntu loading screen – a beautiful sight when you’ve been trying to make something [anything] happen for the last hour and a half. While it took some work to solve these challenges, it helped us learn what we had done incorrectly and how to solve new problems when they arose. It was a rewarding experience to eventually see the computer working.

Once the computer was on, we were able to connect to the Wi-Fi network using the password we found in the encrypted message we were given earlier (this contained a riddle that we had to solve). My team started trying to decode the secret message that we had to print out, but we couldn’t figure it out before first, second, and third place were won. As it turned out, we had to use our keyboard to solve the puzzle – the clue given was “The key is in the board.” Each of the letters in the message were adjacent on the keyboard to the corresponding letter in the decoded message, so by looking at where each letter was on the keyboard, we could find out what the secret message was supposed to say. Even though my group didn’t win, the experience was invaluable – and extremely fun.

First place was won by the team Detemmienation, including Alana Koh, Ben Bonen, and Elizabeth Metzler. The second place was claimed by Brogrammers, with the Xenakis team taking third. Each team won an awesome-looking trophy constructed from recycled computer parts, including circuit boards, wires, fans, and cables, in addition to a gift card to e-End’s gift shop ($300 for first place, $200 for second, $100 for third). A full list of all the winners at this year’s Project eReboot event can be found here. Congratulations to all the winning teams! 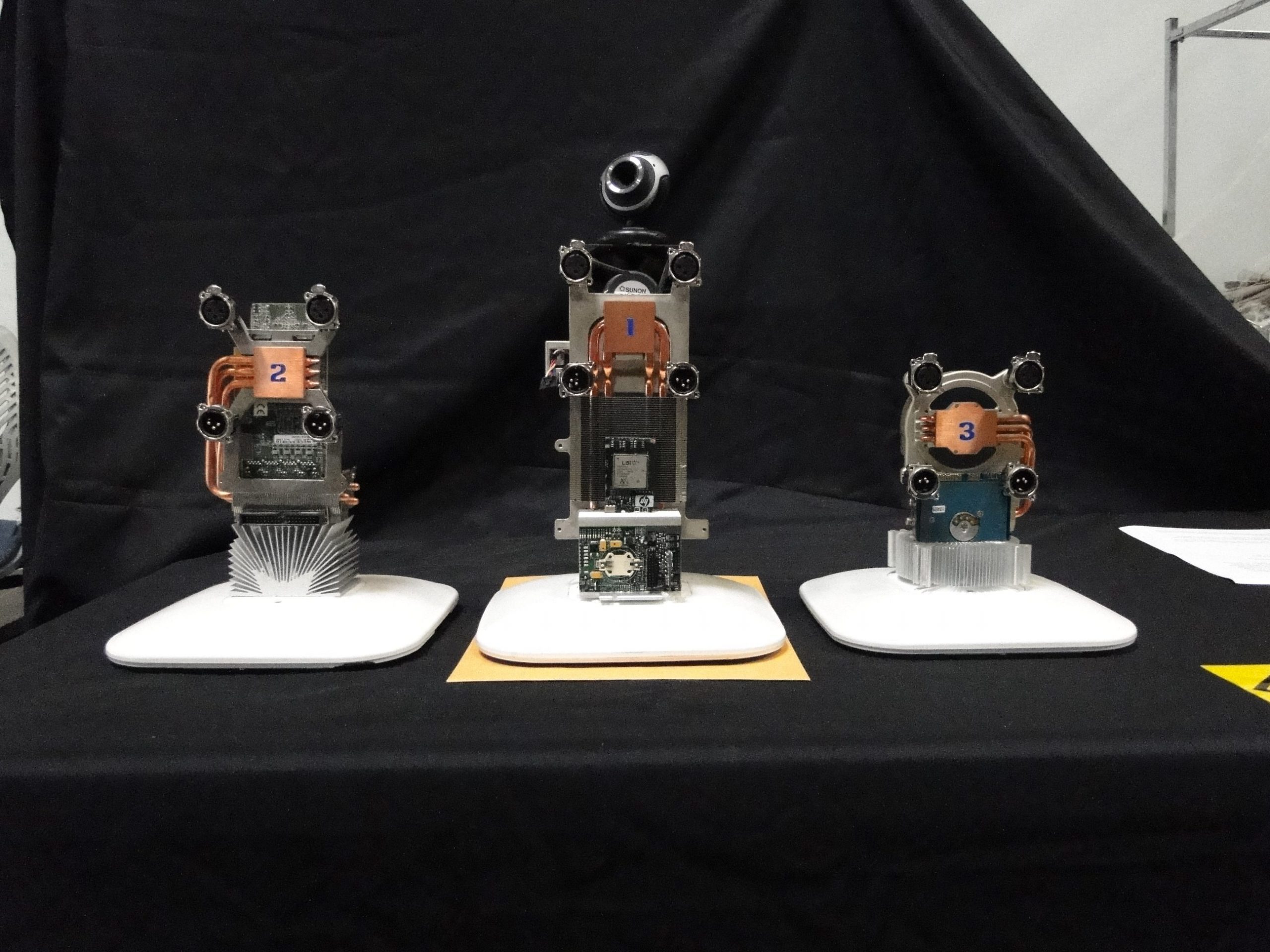 As with many other MAGIC events, Project eReboot was mostly self-guided: teams who did not already know how to build a computer from the many components provided had to figure out how to do it in the limited time available. Competitors were not allowed to use their phones or any other devices during the event to look up information. Hints were available, but a three-minute time penalty was added for each hint used.

In my experience, allowing people to learn how to do something by themselves is almost always more engaging and effective than telling them exactly what to do and how to do it. When people figure something out on their own after struggling, they usually learn better, retain the information longer, and enjoy the experience more. For this method of teaching to work, however, two things are needed: motivation and resources to learn efficiently with. The first is usually not an issue for events like Project eReboot – everyone who chose to participate in the event was already interested in learning about technology, curious, and motivated to learn. MAGIC and e-End provided an environment for people to learn in and the resources they needed to do so.

Those who have experience with building computers definitely had an advantage – but that’s not to say that there were no hints before the event. A week before Project eReboot, MAGIC sent e-mails to competitors mentioning that “anagram and cypher puzzles” might be involved in solving the challenges, and to “Think QWERTY and Bifid” – the puzzles that had to be solved to complete the challenge used these ciphers to encrypt hidden clues and messages. Another e-mail suggested to “brush up on computer components and have a look at unbuntu” before the competition. As it turned out, knowing all the main components of a computer was essential to winning. Ubuntu, a popular distribution of the open-source Linux operating system was provided on a USB drive to boot the computer from. Basic experience with the OS was required to connect to the internet network and print the decoded message that was the final puzzle of the competition.

Each group got to keep everything they built, including the monitor that was included with the computer. This was very generous of e-End, especially considering that the event was completely free. After burning a fresh copy of Ubuntu onto an old flash drive and booting up the computer, it worked just fine.

Like every MAGIC event, the event was an incredible opportunity to expand my horizons and learn more about things that I don’t have much experience with. It was a great opportunity and it was great to see so many people interested in the same thing working together. I’m looking forward to MAGIC’s next Capture the Flag Cybersecurity event, and all the other awesome things that are on the way. Finally, a huge thank you to MAGIC, e-End, and all the volunteers who helped out with this amazing event, without which it would not have been possible.